The Miracle Whip was the smallest and lightest portable HF whip antenna on the market (now there is also the wonderwand antenna that is quite similar). It is a plastic box containing a PL-259 plug and a variable matching transformer (the C-VAT) topped by a 1 meter and half telescopic whip.

The antenna’s performance even without a counterpoise are great!

Very simply: while receiving, rotate the tuning knob until the signal is the strongest. You can do this while listening to noise, it doesn’t need to be another station. This will get you close. Now transmit, and watch the SWR meter on the FT-817. Click below to see the video and great results.

From indoors, I was able to do 15 (!) QSO on 17 m  and 15 m band during SSB contest last month.  The longest QSO was done with Sweden (from Italy!). I give this antenna a mark of 6/10. Great contacts during my summers. Specially on 15/17 and 10 meters great contacts! Good SWR . Add a long counterpoise and job is done! 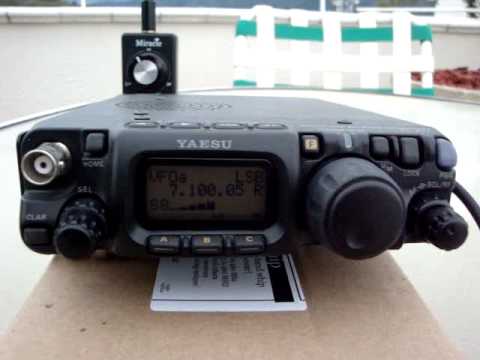 The Miracle Whip works very well as a 1/4 wave on 2 meters band. Better SWR you have if you ground your FT-817 ND.  Fully-extended, it makes a 3/4 wave at two metres, which has some useful gain. This whip should work as a 1/4 or 3/4 wave on 70 cm but I never managed to have an acceptable SWR using a 3/4 length. For 6 meters band I tested several times but I was able to have bad SWR.

MIRACLE Whip antenna compared with others

A few years ago on the Yahoo “HF-Pack” Group the MW was compared with a variety of other antennas in controlled conditions on an antenna test range. Its gain without a wire counterpoise was measured as 29dB below a dipole and 10dB below with one on 20m i.e. some 5 S points down using just the MW alone (i.e. poor) but only 1.5-2 S points down if a decent counterpoise or earth was used too (not at all bad).

Alternatives to the Miracle whip? The Wonder Wand antenna is manufactured in the UK – looks almost identical. It uses pre-tuned switched settings for each band and it also supports a tuneable counterpoise wire. This antenna is not as expensive (only 90£).

The Miracle Antenna Company has recently announced some new versions of their antenna including a switched version (not unlike the Wonder Wand) and one with a BNC connector rather than a whip so that wire antennas and “rubber ducks” can be used instead (The Miracle Ducker).

My opinion on Miracle Whip Antenna in the QRP world.

The Miracle Whip is an amazing short wave receiving antenna for our FT-817 ND QRP Radio. The Miracle Whip offers excellent transmit capability and it doesn’t require a battery. I strongly recommend this whip if you need a cheap, tiny, portable, walkabout antenna mainly for receiving and then for quick contacts not very far away where you are. The best performance in my humble opinion are in CW and higher band (17/15 and 10 meters band) with a counterpoise.
Click below to see video about results of FT 817 and Miracle whip

Theme by Anders Noren — Up ↑